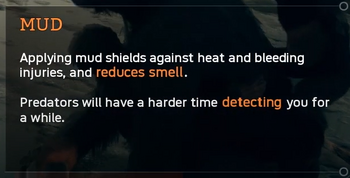 Camouflage is used to prevent enemies from detecting, and thereby attacking, your hominid. Being able to hide from the senses of hostile threats ensures your survival for longer in this already difficult world.

Being in proximity to hostile animals will ultimately lead to combat. Being able to hide from these enemies in plain sight is an excellent advantage for reducing the likelihood of combat and/or increasing the odds of getting closer to an animal to initiate a counterattack against an aggressor. If they never detect you, you are much more likely to successfully catch an enemy unaware.

Camouflage isn't an invisibility cloak where you can't be seen at all but it helps reduce the ability of animals from seeing and smelling you.

While "detection" isn't a negative status effect that appears on screen as a small icon, being detected by hostile threats will inevitably lead to combat.