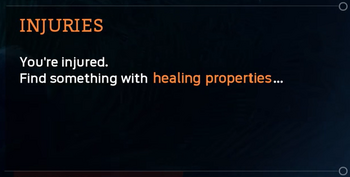 Injury is a negative status effect that temporarily reduces your overall mobility. You hominid will limp and/or hold a limb as if injured. The more severe the injury, the more reduced the movement ability.

Common causes are falling from trees and attacks from animals that charge at you causing blunt force trauma (Ex:

Injury temporarily reduces your ability to move and perform actions. Injuries aren't fatal and will heal on their own over time but it is recommended to heal them with medicine.

Injuries will affect the Life Expectancy of a hominid over time. Although you can heal from injuries, those accumlated injuries are hard on a hominid and life expectancy will go down.

Important: Your clan members may also suffer from injuries without you noticing, so keep an eye out for visual signs of discomfort!

Stage 1 is encountered from short falls and being hurt by smaller animals. You can still travel but your hominid will limp and it takes more effort to move or perform actions.

Stage 2 is encountered from higher falls and being hurt by larger animals. This stage can also appear if you are attacked by a small animal multiple times or you fall while already injured with Stage 1. Stage 2 makes travel and performing actions difficult. It is best to heal this condition before attempting any other actions.

If injury happens and there are no healing items in sight, the injury will slowly heal itself over time if you wait patiently. Be aware though that it is hard on your hominid to be injured and this reduces your life expectancy the longer you are injured.

Injured outsiders can be recruited by curing their injuries using medicine.